• The TOFs of Co-promoted and unprompted sites in WGSR are firstly reported.• The contributions of these sites in WGSR depend on reaction temperature.• The apparent activation energy on Co-promoted site is lower.

Co-promoted MoS2/Al2O3 is the industrial-widely used catalyst for hydrogen production by water-gas shift (WGS) reaction under sulfur-containing condition. Despite of the intensive physicochemical characterizations, the intrinsic activities of Co-promoted and unprompted sites on this catalyst are still unreported, mainly owning to the lack of quantification method of catalytic sulfide sites. With low temperature CO adsorption followed by IR spectroscopy, a distinguish technique developed by our group, this short communication reports the temperature-dependent TOFs (turnover frequencies) of these two sites, and reveals that Co-promoted site is intrinsically much more active than unprompted site at low temperatures, while these two sites are catalytically comparable at higher reaction temperatures. The catalytically different performances are related to the different apparent activation energies of WGS reaction on these two sites. This work fills in the long-standing gaps in hydrogen production by WGS reaction over sulfided CoMo/Al2O3 catalyst. 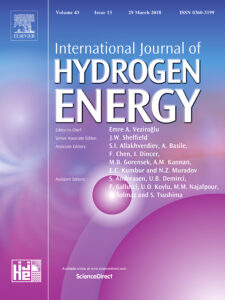