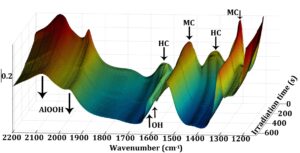 This year, a Plasma-Catalysis roadmap has been published in the journal of physics D: Applied Physics. This Plasma-Catalysis roadmap is an important piece of the collection « Advances in Plasma for Sustainable Future » which was published in the same journal in 2012 and 2017. The goal of this Plasma-Catalysis roadmap, which is written by various experts in their field from all over the world, is to provide insight into the research needs and opportunities in the rich and diverse field of plasma-catalysis, as well as to establish a reference to guide decisions on investments in this emerging research field. The Laboratory of Catalysis and Spectrochemistry (LCS) (Federico AZZOLINA-JURY) together with the Laboratory of Plasma Physics (LPP) of the Ecole Polytechnique (Olivier GUAITELLA) presented a section of this roadmap about several current challenges of in situ diagnostics and experimental approaches in plasma-catalysis as well as various future challenges, including in situ diagnostics and complementary reactor configurations, which are needed to reach significant progress in the plasma-catalysis field through the identification of plasma-catalyst synergy.