Photoreduction of Ag+ by Diethylaniline in colloidal zeolite nanocrystals

• Extra-framework Ag+ in colloidal zeolite Beta nanocrystals was photoreduced by amine.
• Subsequent early nucleation of silver atoms was followed by transient absorption.
• Ag0 is formed in less than 100 ns and is stable for more than one microsecond.
• Ag+ reduction likely arises if the amine is adsorbed on the zeolite particle surface.

The photoinduced formation and the subsequent early nucleation steps of silver atoms (Ag0) in nanosized zeolite Beta crystals stabilized in aqueous colloidal suspensions are studied by steady-state UV-vis and Raman spectroscopy, and by transient absorption spectroscopy. The reduction of extra-framework silver cations is initiated by photoinduced electron transfer using organic electron donors such as N,N-diethylaniline or triphenylamine. The formation of Ag0 occurs in less than 100 ns and is found to be stable for more than one microsecond before beginning to aggregate, leading first to Ag2+ species in ∼1.1 μs. The data suggest that the reduction of extra-framework Ag+ arises only if the electron donor species is adsorbed on the zeolite particle surface or within the channels. 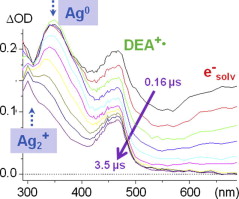