CO/H2 Adsorption on a Ru/Al2O3 model catalyst for Fischer Trospch: effect of water concentration on the surface species

Water presence and concentration strongly influence CO conversion and C5+ selectivity in the Fischer Tropsch reaction. In this work, the influence of the water concentration was investigated using a model Ru/Al2O3 (5 wt.%) catalyst. The surface species formed after CO and H2 adsorption in dry and wet (different water concentrations) conditions were analyzed by FTIR. Firstly, water adsorption was carried out up to complete filling of the pores and then CO was put in contact with the catalyst. The absence of adsorbed CO species in these conditions evidences that CO diffusion in water controls the access of the gas to the active sites and explains the negative effect of high water concentrations reported by some authors. Moreover, the adsorption of a mixture of CO+H2+H2O, being the water concentration close to that needed to have a monolayer, and a dry mixture of CO+H2 were carried out and compared. Results evidence that water in this low concentration, is able to gasify the surface carbon species formed by CO dissociation on the metallic sites. This cleaning effect is related to the positive effect of water on CO conversion detected by some authors. 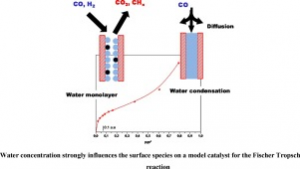