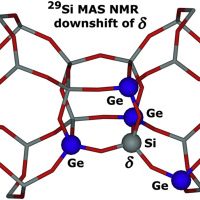 We employed density functional theory/molecular mechanics (DFT/MM) calculations and 29Si magic-angle spinning (MAS) NMR spectroscopy to investigate the effect of single and multiple Ge/Si substitutions on the 29Si NMR parameters as well as the local geometry of SiO4 tetrahedra of the nearest (Ge-O-Si) and next-nearest (Ge-O-Si-O-Si) neighboring Si atoms. The influences of the Ge/Si substitutions are compared with the effects of the corresponding Al/Si substitutions (i.e., Al-O-Si and Al-O-Si-O-Si, respectively). Zeolite Beta polymorph C (BEC), containing double four-membered rings (D4Rs) and exhibiting three distinguishable T sites in the framework, was chosen for this study as a model of germanium containing zeolites. Our computations give a systematic downshift of the 29Si chemical shift of Si by 1–6 ppm for Ge-O-Si sequences. Furthermore, the contributions of two, three, and four Ge atoms as the nearest neighbors to the downshift of Si are not additive and the calculated downshifts lie in the intervals from 2 to 6 ppm, from 1 to 9 ppm, and from 5 to 11 ppm, respectively. Conversely, the contributions of two, three, and four Al atoms as the nearest neighbors are approximately additive. The downshifts caused by Ge nearest neighbors are less than half compared with the corresponding downshifts caused by Al. Moreover, our calculations show that there are no systematic contributions of Ge and Al as next-nearest neighbors (i.e., Ge-O-Si-O-Si and Al-O-Si-O-Si, respectively) to the 29Si chemical shift of Si, and not even the direction (sign) can be predicted without calculating the corresponding sequence.